Frank Earl
OBITUARY
New Jersey Mirror
September 22, 1909
Summary: ... ---Frank Earl, a resident of Pemberton, who was well known throughout the county, died suddenly at his home early Saturday(presumably a reference to September 18, 1909), after an attack of acute indigestion. He had not been feeling for nearly a week, and on Friday, while at his cranberry bogs, he became so ill that he had to be removed to his home. Physicians administered to him without avail. Mr. Earl was a civil engineer and surveyor, and his knowledge of real estate titles made his services valuable, especially to those having dealings in pine district properties, on which he was engaged extensively. In addition to the knowledge he had gained through his own efforts, he was greatly aided by the papers and books of his father Franklin W. Earl, who was engaged in the same line of work prior to his death when struck by the cars at the Pine street crossing, Mount Holly, some years ago. ...

Notes: Formerly practiced law in New York city. He had been in ill health for several years. He is survived by his wife, a daughter of William G. Birney, and one son.

Posted by Whitesbog Life and Times at 11:21 AM No comments: Links to this post 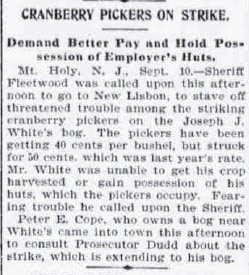 Posted by Whitesbog Life and Times at 5:58 AM No comments: Links to this post